You’ve probably seen Sarah Greaves-Gabbadon’s byline in such outlets as Travel + Leisure, Condé Nast Traveler, Islands.com and many more. The Miami-based writer/on-screen host is a self-described “Carivangelist” who shares the vibrant culture, lifestyle and personalities of the Caribbean with the world. Her online hub is JetSetSarah.com, where fitness, fashion, travel and the Caribbean all intersect. Recently, Sarah joined TURNER via Zoom to discuss the “workcation” trend, the future of travel, and the issue of diversity in the travel industry.

The workcation trend is taking off in 2020. What was your recent experience at Kimpton Surfcomber like?

I loved it. I usually travel three out four weeks of the month. I specialize in the Caribbean and Miami is a gateway to the Caribbean, so I’m always going there. My last trip ended on March 10. And I have not set foot anywhere near an airport or a hotel since. So it was exciting, but there was a little bit of trepidation because I’m one of those who people who has locked down since March. I only leave the house in the morning to go for a run and then Target once a week. But otherwise, I pretty much haven’t been anywhere.

So, it was exciting to think “Oh my gosh, I’m going to a hotel!” But also “Oh my god, I’m going to a hotel!” But it was great. The wonderful thing was that there was enough that was familiar about the experience that it made me remember why I love hotels and being in the travel industry in the first place. But there was also enough that was new that made me feel safe. It was a mixture of what was familiar and what was new and necessary. I felt like [the staff] were paying attention. I walked in the front door and there were signs on the floor saying, “Stay six feet apart,” and “Together but apart.” When you got to the front desk, of course, they had the Perspex panel up, but the smile was very warm and welcoming. I didn’t necessarily feel that barrier. There was a tent card on the desk saying, “Please remember to wear your mask.” All the staff was masked, everywhere. They don’t stock the minibars anymore, so behind the front desk was everything that would’ve been in the minibars, so you could just order whatever you need. Surfcomber is an old hotel from the 1940s, so the elevators probably can’t hold more than four people. Now, there’s a sign saying, “One traveling party at a time.” There were also wall-mounted hand-sanitizer dispensers at every elevator bank. So I really felt that they were paying attention but not in a way that felt stressful. There’s a fine line to walk between making people feel safe and making people feel like they’re in a hospital. You want to still have some elements of that care-free experience of being in a hotel. But at the same time you recognize that it’s not a care-free time. You want to feel that care in terms of cleanliness.

So yes, I absolutely enjoyed swapping my home office for Surfcomber’s Jasmine Cabana. I loved that the Wi-Fi was as strong outside as it was inside. Everyone says they’ve got lightning fast Wi-Fi, but please make sure that your Wi-Fi doesn’t disappear when you go outside. Most people want to get outside. If you have to do a Zoom call and you’re by the pool, you need pretty strong Wi-Fi. Big points to Kimpton for that.

Is there anything you would like to see hotels doing more or less of?

One thing I would like to see more hotels doing is offering day packages and overnight packages. I stayed overnight for my workcation — and at a rate of $109 per night, why wouldn’t you? But there is a market of people who don’t necessarily need that night, who just want to come for the day. They’d rather be there by 8am and out by 6pm. I arrived at lunchtime because I wasn’t leaving until the next day. So, I’d like to see hotels do that — “daycation” packages as well as the overnight. I think you might get a little more business that way. 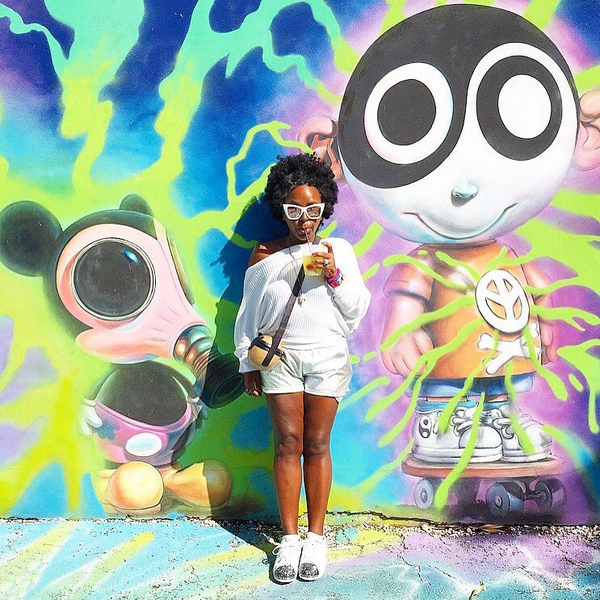 As a content creator in the travel space, what are the biggest challenges you’ve faced in 2020? Is there anything positive that’s come out of this year?

Our biggest challenge is that we’re not traveling. I’m a journalist, but I also have a strong social media presence. And I thought, “If I’m not traveling, am I going to see a thousand followers fall off because I’m not doing it anymore?” The way I overcame that was thinking about how I can be of service. I’m not an epidemiologist, so I can’t help in that way. BUT I can continue to do what I’ve always done, which is inspire people to travel. Not immediately, of course, but to travel when it’s safe to do so.

I had to pivot, which is easier for some content creators to do than others. I adjusted my content to be about inspiring travel and reminding people of the reasons we visit the Caribbean. And then, as the pandemic wore on and some islands reopened, I became a resource for safety protocols and practices — and how they changed. I could tell people, “This is what’s waiting for you.”

But I was very careful and clear about the fact that I didn’t think it was a time to travel. I just didn’t feel that it was responsible for Americans to go to other countries that are smaller and have fewer resources and put them at risk just because we felt we were entitled to a vacation. That’s my own personal feeling, and as a freelancer, I could do that. But I am hoping to return [to traveling] at the end of November. Fingers crossed.

As you return to traveling, what can destinations and hotels do to make your life as easier?

The Caribbean has handled the spread of the virus really well. They were on top of it — and of course, contact tracing is much easier if you’re on a small island. But the problem was that when they started to reopen, the numbers went up. And as a result, there have been a lot of changes in protocols and it’s become really confusing. Even for me. Now, when I get new information, I put it in a COVID file and if I need it for a story, I can go back to it. But you need a stopwatch to keep up with the changes and regulations. Those changes are necessary as we understand more about the virus, but it is very confusing for the consumer.

So, if you’re a destination or a hotel, the first thing you to do is be extremely clear about what the protocols are. That’s really critical. Probably the easiest thing to do is to have a link to your national tourism board’s site, because regulations change all the time. I’ve been hearing from people who have, say, two weeks booked in the Caribbean, and are canceling now, particularly if they’re flying to places that require more than one flight from the U.S. Then, you have two sets of protocols that you’re dealing with. It’s very confusing.

How do you see travel evolving in the next year?

Specific to the Caribbean, but other places as well, the days of spontaneous island trips are over. No one is going to be able to decide on Wednesday that on Friday they’ll go over to Miami Airport and fly an hour and twenty minutes to Jamaica. But the flipside is that we’re going to be much more considered and mindful of the destinations that we travel to — because I think we’re going to be spending longer in those places. If you’re going to have to self-isolate for five days when you come home, you won’t just want to spend two days in a destination. We’re going to see people being more deliberate about where they go, and then planning longer trips. Because now there’s just so much more work involved planning to go anywhere.

As a result, we’re going to travel more deeply. We’re going to really explore destinations, not just lie on the beach and have a Margarita. We may do that for a few days, sure! But people will want to make the most of their time.  Also, I think that further-flung and quieter Caribbean destinations are going to start seeing more traffic. People want “space in the sun” — Antigua is using that as its tagline.

What’s really taken off is this whole “digital nomad” trend, the remote working trend. Bermuda has a program, Barbados has a program, there’s Antigua, there’s Anguilla, there’s Jamaica. Everyone’s jumping on the bandwagon. And I’m seeing real people on social media who are moving to these places for a year. But of course, most of these destinations with remote working packages are not cheap. It’s not for everyone. But I do see people who have the means taking advantage.

As far as hotels go, you’re going to see people gravitate towards boutique-y properties and private island resorts. This is their moment to shine. Petit St. Vincent in the Grenadines is a private island resort, which has only 22 villas on 115 acres.  They’re now offering four villas on a peninsula, and you can buy out that entire area. You and your group could stay in four different villas with your own beach and your own restaurant.

Representation and diversity in the travel industry has been a big conversation this year – what sort of progress is being made and what changes would you like to see in the upcoming years?

I think it’s too early to say what progress we’re making. We’re still in flux. Everybody put their little black boxes up on Instagram, but it’s too early to tell if that’s really making a change in people’s policies. But absolutely, travel writing as a form has always been traditionally through the white male gaze. There’s room for so many other perspectives. When you think about the things that we think of as “exotic,” that’s because they were exotic to the white man who went there first. If you live in Africa, Europe is exotic. So, it’s high time that there were different voices, in terms of bodily abilities, race and gender.

It’s so ironic to me that by its nature travel is one of the most diverse beats you can have. And yet travel writers — and travel PR — are pretty homogenous overall. There aren’t that many Black people in PR. I’ve been writing for 25 years and I’m not sure that I know 10 Black PR people. And those are for Caribbean clients. So, yes, it’s high time we had more diversity. The jury’s out whether we will, but I am very hopeful that we will see some real change.

To be fair, I have seen a lot of Black travel writers, many of whom I didn’t even know before this summer, breaking into mainstream travel outlets. A rising tide lifts all boats, and I’m looking forward to seeing much bigger variety of people talking about their travel experiences.

For TURNER insight and more travel news in your inbox every Wednesday, sign up for the Weekly Download.